I’ll be honest, I’m not a huge fan of sweets. For someone who bakes fairly regularly – and this is much like my mom and older sister – I can have a bite or two and be done. We’ve mused that perhaps making the stuff is exhausting enough to preclude us from having the energy to eat it, but that’s not really it. Something happened during my first pregnancy and whereas I’d always assumed I’d crave ice cream or something, all I really wanted was tomatoes with basil, salt, and pepper and big piles of crunchy salad greens (especially romaine – the colder, the better). I recall waking up one morning at maybe 13-14 weeks pregnant with Russ, during a week where Jonathan was on a project site in Aiken, and I couldn’t think of a single breakfast food I wanted more than chopped romaine with caesar dressing. Which is obvs weird. Hey, you do what you gotta do.
So, that kind of weird palate has been a recurring theme since then, not just with babies #2 and #3, but in my normal non-knocked up life as well. From pickled okra to massaged kale (Google it, I promise it’ll make more sense) to egg salad, I’m not sure it’ll ever change unless we were to get a surprise girl (and no…that is not in the plan at this time, thanks). But while I don’t eat many sweets, the boys love them and I prefer to make them at home where I can control cost and ingredient quality a little more.
Now, this is not a “diet” recipe, I’m just putting that out there. *ahem* And can I just add that this recipe came together kind of by accident? I had intended on adapting one of my favorite recipes from Cooking Light, Butterscotch Blondies – but alas, adding sweet potatoes and changing the amounts of the ingredients to make a thicker bar all somehow yielded more of a moist cake effect, less of a dense, chewy “blondie” texture. Technically speaking: I effed up this recipe.

See what I mean? Definitely not a flat, dense blondie…but not quite a cake. What happened here? I’m still not sure.

Actually, it’s really a weird cake, I’m gonna be honest with you – somewhere in between the denseness of a blondie/brownie, not quite fluffy like a cake. This “cake” is the Gary Johnson to the blondie denseness of Hillary or the puffed up, airy quality of a fluffy Donald Trump. It is the Independent Party of Desserts. And I’d need a pastry chef to explain why (which I am not). Oops.

See, part of my problem is that I don’t look at recipes as scripture. I tend to pick and change things and experiment, which is fun until you end up with an accident you can’t explain. Oh well. Thankfully, it still tastes amazing. Which is lucky, cause I phoned. it. in. I present for you The Recipe Formerly Known As Sweet Potato Blondies, which I’ll now just call Accidental Sweet Potato Cake (with Maple Icing-Glaze).

If you’re not familiar with “browned butter,” you darn sure outta get familiar because it’s an amazing addition to basically anything from mashed potatoes to baked goods – but there’s a definite art to it!). Butter will foam up once and settle down before foaming up and bubbling again. This process will take 5-6 minutes, at which point you will notice the butter starting to turn an amber-brown hue. Once it reaches a light caramel color, immediately get the butter off the heat, out of the pan, and into a bowl to stop the cooking process. (This process is 5-6 minutes of being VERY hands on, so get your duckies lined up before you start or it’s gonna be a zoo (i.e. my house) and you’re gonna have burned – not browned – butter. Gross.) 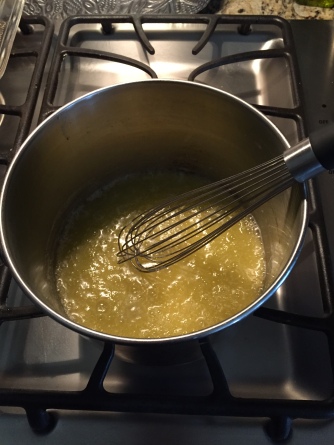 First it does this… 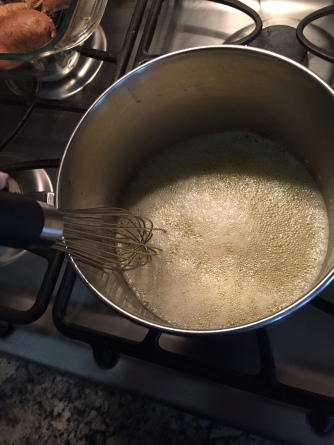 Then it does this…

Combine browned butter with vanilla, beaten egg and mashed sweet potato, stirring with a whisk. Pour wet mixture over flour mixture; stir until combined. Scrape batter into a 9×13 nonstick / sprayed pan. Bake at 350° for 30 minutes or until a toothpick or knife comes out clean.

I made this in the microwave because 5-7 minutes of browning butter is strenuous enough. My back hurts. Is it nap time yet??
In a microwave safe bowl or Pyrex, melt the butter for 30-45 seconds. Add maple syrup and return to the microwave for 30-45 seconds or until its bubbling (popping…whatever, the inside of my microwave looks like a post-apocalyptic battle ground). Add powdered sugar, vanilla, and cinnamon and whisk until thick but smooth. You may need to adjust the powdered sugar up to get the right consistency. You want it to thickly coat a spatula and not be too watery, but it’s also not quite a true “cake frosting.” Somewhere in the middle. Like a third party candidate.
Spread that fence-straddling icing on that cake and enjoy! 🙂