Well, we’re now nearly a week into Russ being completely finished with nursing, and I have to say that I am pleasantly relieved and surprised at how easy this has been. I was really expecting that, after having a pretty decent time with nursing (save for those nasty first few weeks that I mentioned here), Nature would issue me my comeuppance when it came to weaning the little guy. Thankfully, that well deserved fate seems to be evading me for the time being. Betcha anything the next baby will be a hellion, don’t you think?

Tuesday afternoon – not even a full 24 hours after the last feeding – I met up with a friend who has a three month old son she is knee-deep in nursing. She was asking me how the weaning process works, and if it is uncomfortable (Google “engorgement.” Avoid the image search. Let’s just say it’s not fun.). I was telling her the beauty of it, if you go gradually, is that you almost don’t notice any change other than the symbolic stuff. I mean, when the baby is nursing once a day, you’ve pretty much lost all that “Wow, these nursing boobs are the BEST!” allure (come on, A cup to a C/D cup is never not fun on some superficial level, and I don’t mind admitting it). In fact, by the time you get to one daily feeding, you can almost forget to nurse the baby before he falls asleep, and if you’re lucky, he/she doesn’t exactly remember either. It’s really just habit and comfort source at that point.

So, moral of the story for all those mommies who are so entrenched in their nursing schedule that they can’t imagine the difficulty and dreadfulness of weaning the baby: 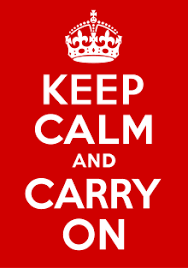 It’s gonna be alright. And, unless you – by some superhuman feat – exceed my capacity for the heady cocktail of worrying, anxiety, and sentimentality, you’ll adjust pretty quickly. I assumed I’d bawl over the loss of the nursing relationship for days on end, but I managed to keep the tears to just Monday (W Day) and Tuesday (First day of no feedings). Since Tuesday, I’ve pretty much been fine, thankfully! I will say though, realizing how quickly Russ is growing up and how interested he is in other children has made us start looking towards the next little Wilhoit.

No, I’m not pregnant (just in case anyone was going ask) – at least, not that I know of. Though, between you and me, I’m crossing my fingers that the next pregnancy sneaks up on all of us in a sudden, blurry, 3 am McDonald’s drive-thru delivery so that I can land a spot on “I Didn’t Know I Was Pregnant” and finally have a girl five times more attractive than me portray me in the dramatic reenactment!

SO, the other fun thing that happened this week was FAMILY PICTURE TIME! And it was so not the awkward, itchy-wool-sweater event that I always envision when I think of family pictures. And though we’d talked about doing black-and-white for the shirts, we ultimately decided matchy was not us (and also, my rapidly shrinking husband and rapidly growing child have pretty limited closets). So, we headed out at the butt crack of yesterday morning to Campbell’s Covered Bridge, an absolutely GORGEOUS place to take pictures. And apparently, we weren’t the only people who thought so, since whereas we were the only folks there at 8:15 am, we had quite a bit of photo-happy company by the time we wrapped up at 10:00.

We have these great folks that moved here a few months ago that Jonathan knows from Fluor. Rainy and Jeff Hoeft are just a fabulous couple who we have such a good time with. The first time we met Jeff, back in the late Winter/early Spring, he showed us some of his photos that he had uploaded to his iPhone. I was immediately beyond impressed and thought “Man, this guy is freakin’ talented.” So when we were able to have our own family photos (as well as Russ’s “Cake Smash” pics) taken by him, we were pumped!

So, the shoot yesterday was tons of fun, as well as the dinner double date we did with Rainy and Jeff last night (Russ stayed at G-Ma and G-Pa’s place for a few hours). It has been awhile since Jonathan and I had a date night, so it was nice to get kind of dressed up and go enjoy all that downtown Greenville has to offer. I truly love where we live, and all the great people we’ve met here!