I had a post already written for today, and I actually posted, oh, for about 20 minutes. But then I decided it was just more rehashing of a lot of stuff that really isn’t important anyway. Redux: I’m not going to either of my high school reunions Considering I avoid the Walmart in my hometown for the exact reason that so many people would jump to go to their high school reunion, I just don’t think I’m much cut out for it. So there ya have it. Why waste time or energy on that when there’s something so much more exciting happening:

Isn’t the excitement just barely containable? Okay, unless you’re a brand-new mommy who is quickly discovering that just reading the word “breastfeeding” can actually, literally cause you to spring a leak (I’m totally not joking), you’re probably not super-psycho-pumped about the whole thing. But let me tell you, it’s definitely exciting stuff.

It’s hard to believe it’s been both such a short time and such a long time, but approximately 10.5 months ago, this little guy came into our lives: 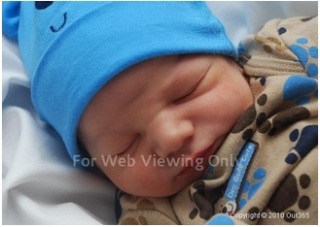 That’s one of the Our365 Web Nursery pictures that they took in our hospital room the day after he was born. Is he not just the most perfect little thing ever? I know every parent feels that way, but seriously – even if my little guy had been born looking like a monkey, I’d still think the sun shined out of his ass. He’s just that amazing.

Of course, this means that my first time nursing started 10.5 months ago, as well. Now, I’ll say this much up front: Other than my mother, everyone I know said nursing would SUCK. I’m talking horror stories on top of more horror stories, with a few nightmares thrown in. I know a lot of women who have personally experienced some of the most uncomfortable things that breastfeeding has to offer – stuff like clogged ducts, raw or cracked nipples, or the dreaded mastitis. But – and I thank the good Lord above – I have actually had a relatively easy time with nursing. Now, that’s not to say that nursing itself was categorically “easy,” cause it wasn’t. But compared to a lot of people I know and especially to the overall preconceived notion of what nursing would be like, I have been pleasantly surprised. I expect that it was get progressively more difficult with each baby hereafter, even if nothing about the experience actually changes – since, ya know, nursing with 1, 2, or even 3 other kids in your house can’t possibly do anything to make breastfeeding easier.

When I latched Russ on that very first time, probably not a full 20 minutes after he was born, I don’t remember very well exactly what went through my mind. I think it was probably something along the lines of “Am I doing this right?”  One thing I learned very quickly in those first few blurry days in the hospital was this: A nursing mother may be the sole owner of the boobs in question, but she most definitely cannot be the sole person invested in the process – otherwise, it’s beyond difficult. I mean, having a baby under any circumstances is almost never easy (I would venture to say “never. period.”). But breastfeeding is tough.

It’s tough to get comfortable enough to nurse a baby at a rest stop on a long car trip, trying not to flash complete strangers, trying not to leak milk all over your shirt and your bra. It’s tough to be out for a rare solo trip while the baby is at home with daddy, standing in the middle of the grocery store, when a baby way the heck over on aisle 5 starts crying and you start dripping – a biological response beyond your control, of course, but not any less annoying. It’s tough to always avoid foods you love (garlic, onions, margaritas… anybody?) in the case of a baby with a sensitive tummy. It’s tough to have your once equal-sized boobs suddenly go all uneven as your baby forms a preference for one side over another.

Yeah, all that stuff is tough. It’s aggravating. Annoying. But so completely, totally worth it.

When I started all this 10.5 months ago, I said I’d try to nurse Russ until he was about 3 months old. Then I got to 4 months and I said “Well, maybe until he’s 6 months.” Then I got to 6 months and the thought of quitting broke my heart, so I said “Maybe 9 months.” But honestly, by the time I got to the 7th month, my mind was made up – I was going to get this kid to his first birthday. Really, after they get settled on solid foods, they only nurse 3-5 times a day, anyway. Russ is down to where he nurses in the early morning, once during the day, and right before he goes to bed. I imagine the nighttime feeding will be the last one he drops, but I’d be lying if I told you I’m looking forward to quitting. I’m not. It makes me sad to think about it, and it makes me look forward a little more to the next time that we have a baby here in the Wilhoit house. I hope I can do the same for all the children that God blesses us with, because it has really been an incredible thing.

Now, I’m going to address the whole formula vs. breastfeeding controversy. Honestly, I think every woman’s mothering experience is like a fingerprint – no two are exactly alike. And for that reason, I don’t think it’s fair to lump judgment on one another. Heck, even if they were all alike, not all women are alike – so it’s still not cool to judge. That said, I really would love to see more women at least trying. Some women come into motherhood with odds and situations stacked against them, not the least of which include premature babies, inverted or flat nipples, infection or birth injury,  or even, in some cases, pre-existing conditions like cancer that need attention immediately. But if you are in great health and your baby is in great health, why not? Why not give it a shot? Hospitals can do a lot to help encourage this by offering more and better education, by having more and better International Board Certified Lactation Consultants (IBCLCs) on their staffs, and by not giving healthy babies formula or sugar water unless it is medically necessary. If we want to see rising breastfeeding rates, especially in the U.S. (easily the worst in the world), it’s going to take a team effort.

Women cannot be left alone to do this any longer. To echo a sentiment of one of my friends who just welcomed her second child, it has to be a “we” thing, not just a “me” thing. Women cannot be abandoned the minute they leave the hospital – we’ve got to get behind one another when it comes to nurturing the very people who nurture the generations of tomorrow.

Women need to feel like they have a cheering section when it comes to breastfeeding – especially because it will mean undoing decades of propagandizing and stereotyping of women when it comes to how breastfeeding fits into their lives, their culture, economic status, and health benefits. We’ve got to get to the point where, as a culture, it doesn’t shock us more to see a kid’s doll touted as a “breastfeeding doll” than it does to see a doll baby that has bottles included in the package. I’m not saying I’m going to go out and buy my hypothetical 8 yr. old a breastfeeding doll – but I definitely don’t think it’s any more or less “appropriate” than a doll that has bottles included. What’s with the relentless over-sexualization of breasts? Get over it, people!!

So that’s my feeling on the whole thing, in a nutshell. But then again, I’m not sure I could really sum it all up in even that amount of yammering, because I’m still kind of “in it,” so to speak. I have to be honest – midway through writing this post, I had to step away because I was starting to feel sad. It hit me that my baby is almost a toddler, almost a year old, and that my days as a breastfeeding mom are now very much numbered. I’m not that girl in that hospital bed anymore, wondering what the heck I’m doing and if I’ll be able to keep it up. I can’t believe that this time last year, I was 34 weeks or so pregnant, looking towards an imminent delivery and all the terrifyingly wonderful things that were awaiting me. It was all so unsure at that point. If you’d have told me I’d still be nursing right now, I don’t know if I’d have believed you. But once we got over the hump at the beginning, it all just kind of settled into a way of life. I guess I’m a little apprehensive of another change, to another way of life, where Russ doesn’t need to snuggle up to me and nurse at 6:30 am. I know that’s not something that a lot of people love, but I live for those cozy moments with my baby boy nuzzled up to me. Those moments in life are so temporary. But I’ve really been blessed to have been able to give Russ this start. I know it’s the best I could do for him, and I honestly cannot wait to do it again.

Plan on there being a lot more blog posts about the weaning process – this will be my place to sort of “deal with” the smidge of depression that will almost surely follow when Russ doesn’t “need me” for that anymore. I know not everyone will relate, and that’s fine (seriously, it’s totally okay with me), but I hope it doesn’t weird folks out. I actually called my mom awhile back (like, when Russ was a month old), when I really started to enjoy nursing and was getting settled into the whole process, in a panic. It had sort of just hit me that he was going to grow up (fast), and that I would have to wean him at some point. She told me she was always a little sad when each of her kids stopped nursing, but that it gets better. So I’m trusting that she’s right! But bear with me if I’m a little mopey about it.